About the Ice House Lofts

The Ice House Lofts were redeveloped by a local Tucson architecture firm, Rob Paulus Architects, in 2004-2005. The Ice House Lofts consist of 50 units, varying in size from 580 to 2,700 square feet, from studios up to 3 bedroom homes.

The conversion to lofts was a natural for Paulus’ team, with the 40-foot high interiors lending themselves to the airy feel of urban loft design. The complex is gated and offers covered parking for residents. Community amenities include a pool, spa, gym, and even a little free library on site.

The Paulus team tried to reuse and recycle as much as possible during the reconstruction process. They reused thousands of feet of steel piping as a modern pool fencing. Many valves were saved and reused as exterior gate handles. Some of the old equipment became sculptural yard art to be appreciated by residents and visitors alike.

Rather than covering up the structural elements, they were embraced and highlighted throughout the spaces. New contemporary finishes, like steel staircases, compliment the old rustic materials.

The Ice House Lofts are conveniently located about 1.5 miles south east of Downtown Tucson and about 2 miles south of the University of Arizona.

Ice is something most of us take for granted in our modern lives. With a touch of a button on your refrigerator door, ice cubes appear like magic, making that beverage extra refreshing during hot summer days.

But this modern cool convenience wasn’t always so easy to get. Ice was necessary to keep perishables cold in the icebox. Not so long ago, large blocks of ice were delivered door to door like milk was by the milkman. Ice was also used by the railroad to keep produce fresh for the long trek from California to the Midwest and East. And making a lot of ice in a hot climate required a lot of expert engineering.

History of the building

The buildings that the Ice House Lofts now inhabits were built in 1923 to produce ice for Tucson businesses and residents. One of their largest customers was the railway, which is why the location adjacent to the tracks was chosen. Ice provided the cooling for refrigerated boxcars like the Pacific Fruit Express, prior to the advent of electric cooling systems. The cold storage portion of the business stored many things over the years, from shrimp, to pickles, to Christmas trees(!)

History of the Arizona Ice and Cold Storage Company

Tucson Ice and Cold Storage Company was established by George Pusch Sr.(1847-1921) and John Zellweger (1847-1924) in 1898. At that time, their office and ice plant were located downtown on Toole Avenue. Beyond selling ice, they also sold distilled water, coal, fuel oil, and bottled beer.

After the death of Pusch, the business was sold to a group of Tucson investors, including Jack B. Martin Sr. as plant manager and Zellweger as President, and was renamed Arizona Ice and Cold Storage Company in 1922. Soon after, construction started on the new ice making facility that eventually became the location of The Ice House Lofts.

Gay Engineering of Los Angeles was selected to build the new ice plant in 1922. Building ice manufacturing facilities was a niche for Gay Engineering, they built most of the ice plants along the Santa Fe railroad line, as well as in Douglas, Bisbee, Globe, Prescott, Phoenix, and several other Arizona towns and cities. 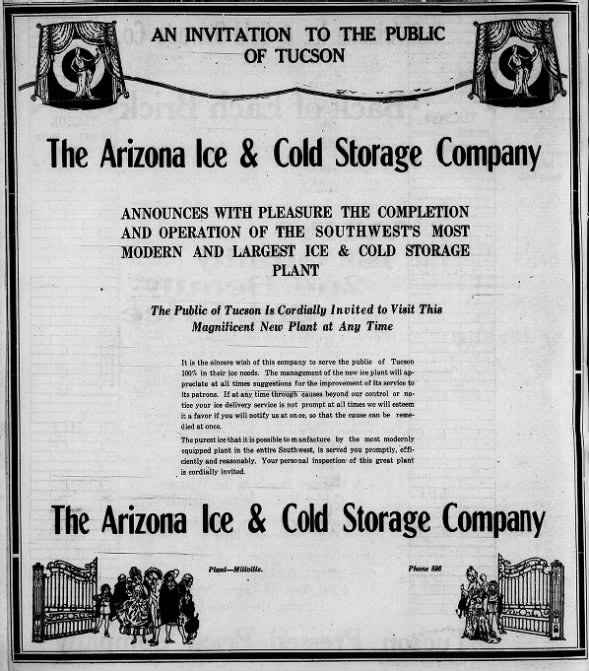 Fire broke out on New Years Day 1923, during construction, causing the largest insurance payout in Tucson up to that date. The fire was hard to put out due to difficulty in getting water to reach the flames.

Interestingly enough, 81 years and 2 weeks later, fire would again break out at the under-construction Ice House Lofts in January 2004. This fire was caused by sparks from a welder’s torch. Fortunately, the fire happened in an area that had a lot of demolition to be done. The firefighters were able to put the fire out quickly due to a new mapping program the building was enrolled in with the Tucson Fire Department. This gave the TPD insight on how to fight the fire most effectively and quickly.

Jack Martin Sr. sold the company in the 1950s but he stayed on as a manager until his retirement in 1959. He also had the last ice box in Tucson, insisting that ice was the best coolant available.

Ice was manufactured onsite until the early 1980s, and the space was used as cold storage until 2002. In January 2003 it was rezoned for residential use.

The Founders of Arizona Ice and Cold Storage

George Pusch was an immigrant from Germany. Johann “John” Zellweger was George’s friend and an immigrant from Switzerland. Both were meatcutters by trade who met in Germany. At age 18 and 15, respectively, they traveled to the United States together, finally arriving in Tucson in their 20s.

The two men pooled their resources to establish Steam Pump Ranch in 1874 which is located in the Oro Valley area. It’s named for the steam pump that was used to draw water. The ranch became a stopping point and watering hole for both ranchers and their cattle, on journeys from Tucson to communities in Pinal County.

Incidentally, Harold Bell Wright was a frequent visitor at the Steam Pump Ranch. Pusch’s oldest daughter Gertrude, told Wright the legend of treasure of the mine with the iron door, which was rumored to be located in the Santa Catalina Mountains. Wright, a prolific author, wrote a book called “The Mine With An Iron Door” published in 1923. The bestselling book book became a movie that was filmed in Tucson, due to Wright’s insistence, and premiered at the Rialto Theatre in 1924.

Both Pusch and Zellweger became prominent Tucson citizens. Pusch was active in Arizona politics, serving on the Tucson City Council as well as representing Pima County in the Territorial Legislature.

Jack Martin Sr. was a prominent Tucsonan who lived in Colonia Solana neighborhood, served on the State Board of Regents, and was on the board for the Federal Reserve Bank of El Paso. He got his start by founding the People’s Fuel and Feed Company in 1915, where he sold mesquite wood from his mother’s 100-acre property for the next 7 years. 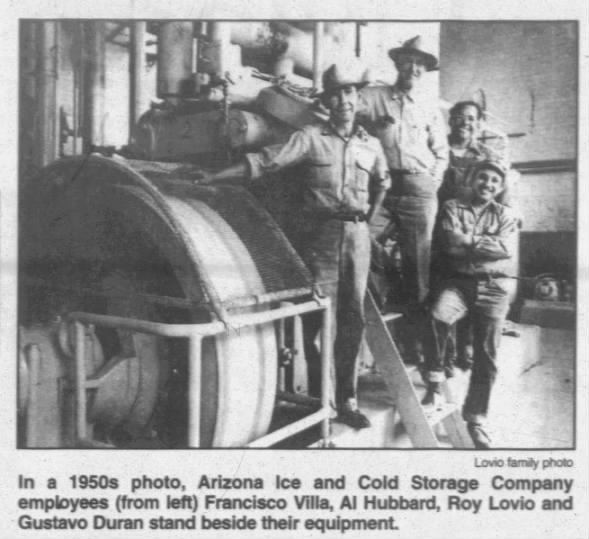 Rob Paulus Architects is a local architecture firm that is known for designing environmentally friendly, contemporary residential and commercial buildings throughout Tucson. The firm is located across the street from the Ice House Lofts.

Merritt Starkweather – The architect that designed the Arizona Inn

Nick Labriola May 13, 2010 No Comments
Merritt Starkweather, FAIA was a well-known, prolific Tucson architect from the 1920s to the 1970s. He designed area schools, (Carrillo, Drachman, Bonillas to name a …
Read More

Nick Labriola May 17, 2010 No Comments
Joesler and the Murpheys Josias Joesler is arguably the most well-known Tucson architect. Originally from Switzerland and coming to Tucson after living in various cities across …
Read More

Nick Labriola June 17, 2010 No Comments
A brief history of the Pueblo Hotel This classic 1950s neon sign advertising a hotel pool for the former Pueblo Hotel is much beloved by Tucsonans. The …
Read More

Nick Labriola June 28, 2010 No Comments
Harold Bell Wright Estates, located near Speedway Boulevard and Wilmot Road in Tucson, has a lot of local history. If you’re like me you’ve probably …
Read More Nick Labriola March 9, 2011 No Comments
About the Fort Lowell area Fort Lowell Park is a great little city park located in the north-central area of Tucson at Craycroft and Glenn. The …
Read More The Historic Cheyney House is For Sale in Downtown Tucson

Nick Labriola January 30, 2013 No Comments
A historic Tucson home, known as the Cheyney House, is up for sale downtown (Update: this home is currently off market). This home was named …
Read More