Villa Catalina Apartments are one of the most recognizable communities in Tucson. They’re a wonderful example of mid-century modern architecture with a broad linear roof line, floor to ceiling expanses of glass, and the unique circle-within-square railing motif. The development was designed for patio apartment living, which gained popularity in the post-war era and was promoted as ‘Tucson’s first own-your-own apartment homes’.

The units were constructed in 2 phases between 1957 – 1961 in what was the eastern edge of town at the time. After several decades of growth in Tucson, Villa Catalina is now conveniently located in the middle of town, at 6th Street and Country Club, at the eastern edge of the Sam Hughes neighborhood. The western border of Villa Catalina abuts another condo community, El Encanto Condominiums (an Art Brown designed project), which is also listed on the National Historic Register.

Homes for sale in Villa Catalina

Listing Office: Realty Executives Arizona Territory
1
The data relating to real estate listings on this website comes in part from the Internet Data Exchange (IDX) program of Multiple Listing Service of Southern Arizona. IDX information is provided exclusively for consumers' personal, non-commercial use and may not be used for any purpose other than to identify prospective properties consumers may be interested in purchasing. Listings provided by brokerages other than the listing brokerage here are identified with the MLSSAZ IDX Logo. All Information Is Deemed Reliable But Is Not Guaranteed Accurate. Listing information Copyright 2020 MLS of Southern Arizona. All Rights Reserved.

“Every palatial sliding plate glass door and window frames a serene and delightful vista… only a step into your own moonlit lanai… to one of the two cooling, emerald pools… in the breathtaking beauty of sun and shade in Tucson’s stimulating, invigorating out-of-doors.”

Villa Catalina was developed by Lionel Mayell, who also built condominium communities in Long Beach, Los Angeles, Pasadena, Palo Alto, Santa Barbara, La Jolla, Phoenix, and many cities in Florida. He was the first to construct cooperative apartment buildings west of Chicago and by the 1960s he was dubbed the ‘Condo Pioneer’.

Lionel Mayell had an interesting history. He was born in 1897 in London, Ontario (about halfway between Detroit and Buffalo). At age 12, Mayell moved to Los Angeles with his family. He graduated from Occidental College and went on to attend law school at USC and Stanford.

During this time, he was fascinated with the idea of apartment homes that could be owned by individuals. He got his start with The Artaban in Long Beach, California in 1920. He went on to help develop the Cooper Arms(1924), and Villa Riviera (1929) until the Great Depression hit.

His daughter described him as going broke during the depression. “By age 39, he had made and lost a fortune, failed at two marriages, and was convinced the naysayers were right.” During the 1930s Mayell traveled in Spain promoting cooperative apartments and producing a musical variety show in towns along the Mississippi River. In the 40’s he became deeply involved in his church, where he invited 25-year old Billy Graham to speak at a church conference in Los Angeles.

In the post-war years, he got a $1,000 loan. After donating half to a Christian evangelical group, he used the other half of the loan to start Lionel Mayell Enterprises. His company designed or built at least 18 cooperative apartment developments over the next 20 years. These projects were in Southern California, Arizona, and Florida. 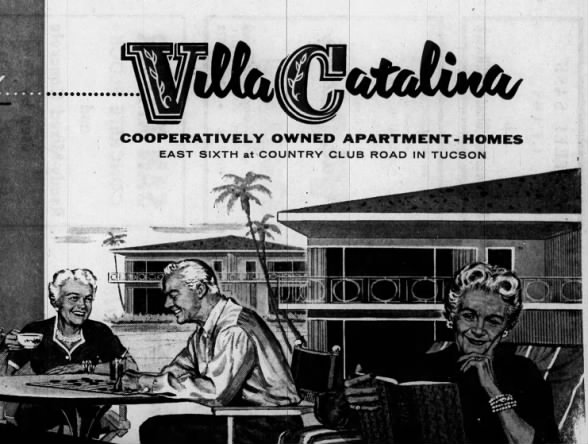 Villa Catalina consists of 20 buildings arranged in a rectangle, with a total of 79 units. The units vary in size from 1000 – 3000 sf, with 1 – 3 bedrooms and each unit has a garage space. There are 2 pools within the lush interior courtyard, as well as a putting green, built in barbecue grills, and shuffleboard courts.

In 1992, Villa Catalina was converted to a 55+ community. Which means one resident must be at least 55, and no residents under the age of 18 are allowed. Pets are also not allowed in the community.

Listed on the National Register of Historic Places

Villa Catalina was recently listed on the National Register of Historic Places in December 2009, which offers significant tax savings. Many of Mayell’s other condo developments are also listed on the historic register.

5 things I love about this neighborhood:

Interested in buying or selling a home in Villa Catalina? Contact us today to go over your needs: Hello@RealTucson.com or 520-975-8956 Kim Labriola July 3, 2021 No Comments
Tucked Away in the Middle of Town Eden Roc Gardens is a midcentury modern condo complex tucked away just east of Reid Park behind the DoubleTree …
Read More Nick Labriola June 23, 2021 No Comments
About San Clemente Neighborhood San Clemente is a historic neighborhood in central Tucson that was mostly built between 1930 – 1959. The homes here feature several …
Read More Kim Labriola January 5, 2021 No Comments
Burnt Adobe is at home in Tucson Tucson is said to have the most burnt adobe homes in the United States. Lucky us! Most of these …
Read More

Nick Labriola January 6, 2019 No Comments
Do you love the warmth of burnt adobe? Do you prefer the natural character of stained wood? Are you in love with anything vintage or …
Read More