Casitas de Castilian is a 120-unit condominium community set within 17-acres of grassy and mature landscape. The neighborhood is on the north side of Tucson, near Oracle Road and Orange Grove Road. The homes were designed by the award-winning Arizona architect Bennie M. Gonzales and built by developer Kenneth Kamrath in the mid to late 1960s.

Open Map
0 Matches Found
1
The data relating to real estate listings on this website comes in part from the Internet Data Exchange (IDX) program of Multiple Listing Service of Southern Arizona. IDX information is provided exclusively for consumers' personal, non-commercial use and may not be used for any purpose other than to identify prospective properties consumers may be interested in purchasing. Listings provided by brokerages other than the listing brokerage here are identified with the MLSSAZ IDX Logo. All Information Is Deemed Reliable But Is Not Guaranteed Accurate. Listing information Copyright 2020 MLS of Southern Arizona. All Rights Reserved.

The crisp white-painted burnt adobe, mid-century condos are loaded with character and feature many arches and include welcoming patios and courtyards. The neighborhood is technically a condo community, but they feel more like townhomes.

116 of the condos are ground floor, single story units. 4 units are 2 stories. There are 4 condo units per building. The single story condos range from about 800 – 1600 square feet in size, with 1 to 3 bedrooms. The 2-story units are around 2600 sf. There’s typically 1 carport space per unit.

“He {Bennie Gonzales} believes the cluster type building, now being done by some developers, is the best thing that has happened in a long time in residential development, especially if the area is properly landscaped.”

The community of Casitas de Castilian

Casitas de Castilian is an adult 55+ community with 2 pools (at this time, one pool is heated during the winter), a tennis court, and a clubhouse. The neighborhood has weekly activities such as bridge, water aerobics, game night, tai chi, etc.

The HOA fees cover water, garbage, maintenance of the common areas, and exterior painting. Pets are limited to 2 per unit, with a limit of 1 dog per unit. Of course, you’ll want to read all the neighborhood regulations prior to purchasing, for updated information.

What I love about Casitas de Castilian: 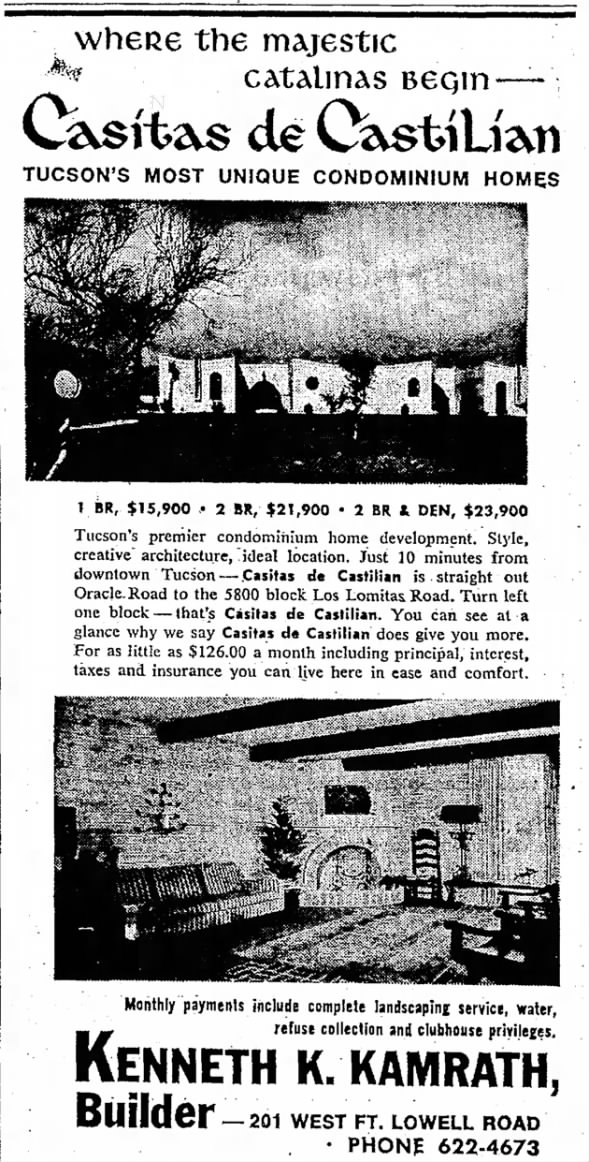 Bennie Gonzales, FAIA, (1924-2008) was born in Phoenix as Barnaby Montague Gonzales. He was an award-winning architect who had an active career throughout Arizona (and beyond) from 1958 – 2000.

Bennie’s father tragically died when Bennie was only 7 years old. Bennie’s uncle became a father figure and mentor to him. His uncle owned an adobe brick factory in Phoenix where Bennie helped out as a child. Many of his relatives were in the construction industry, and he was often taken to construction sites. When Bennie was 8 years old, he saw Frank Lloyd Wright during a visit to the Biltmore construction site, which inspired him to become an architect too. His uncle encouraged him with his career aspirations. During summer vacations, Bennie visited his grandmother in Nogales, Arizona, a city where he later lived and worked.

“While visiting the Biltmore site, an 8-year-old Bennie saw Frank Lloyd Wright. He was so impressed by the respect the workers showed Wright that he decided to become an architect himself.”

Bennie joined the US Coast Guard a day after the bombing of Pearl Harbor, he was only 17. The Coast Guard travel gave him exposure to architecture from around the world. After the war, Gonzales studied architecture at Arizona State University, in fact he was one of the first graduates of the new architecture program. After completing his degree at ASU, Bennie attended University of Mexico Architectural School.

Return to Phoenix to start his career

Bennie starts his own architecture firm

In 1958, Bennie opened his own architecture studio in Scottsdale. His first major project was a library in Nogales, Arizona, which won an AIA award. The library was constructed of burnt adobe with sweeping arches and a dramatic roofline. He kept the budget low while still creating an imaginative, modern, and functional building that is beloved by generations. This project lead to several other library commissions in other Arizona cities.

In the late 1960s, Bennie won a commission for the Scottsdale Civic Center by beating out 36 other firms. This project featured a blocky design with deeply recessed windows, stucco masonry covered in Navajo white paint. His firm earned 3 AIA awards for this project.

Gonzales created close to 300 buildings, most of them in Arizona, but a few in other states and some in Mexico and Saudi Arabia. He often used arches, and angles larger than 90 degrees, and frequently used building materials like brick, block, and adobe for their classic durability, rather than trendy materials.

Are you looking to sell or buy a home in the Casitas de Castilian neighborhood? Contact us today. hello@realtucson.com or 520-975-8956. Last week I wrote about Tucson’s Reid Park, and featured many of its amenities. This week I’ll be discussing the many neighborhoods around Reid Park. …
Read More