Winterhaven is easy to identify with wide streets lined with large evergreen pine trees, lots of green grass, and other non-native vegetation. The curvilinear design of the streets is similar to the Tucson neighborhoods of Colonia Solana and El Encanto Estates.

Most of the 265 homes in the neighborhood were built between 1949 – 1961 and consists mostly of masonry (red brick, mortar washed brick, or burnt adobe) ranch-style homes. 22 of the homes were designed by noted Tucson architect Anne Rysdale.

Homes in Winterhaven are usually 3-4 bedroom and vary in size from 1400 sf to 2300 sf. Winterhaven is within the Tucson Unified School District and is serviced by Cragin Elementary, Doolen Middle, and Catalina High schools.

Homes for sale in Winterhaven

The History of Winterhaven

Winterhaven was developed in 1949 by Charles Brady “CB” Richards of Richards Development Company. The land was previously the location of one of Richard’s companies, the Tucson Fertilizer Company. Richard was also the owner of the Tucson Cowboys baseball team in the early 1950s.

Richards hired William O. Fraesdorf Jr. to represent him in selling the properties. Fraesdorf purchased the first house in the neighborhood located on Christmas Avenue. Conflicting information was found regarding if it was Richards or Fraesdorf who was inspired by the midwestern community of Shaker Heights, Ohio when creating the design of the subdivision. But they both sought quality architecture and midwestern style landscape design for his neighborhood as a draw for post-war home buyers. 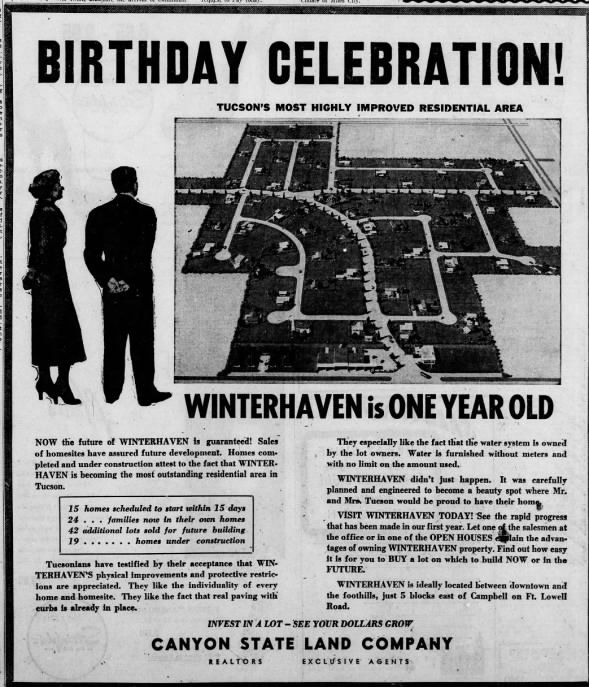 The neighborhood is not connected to city water, instead the Winterhaven Water & Development Company is a cooperative that residents have access to through their HOA dues. Richards knew that to provide the lush midwestern landscaping in the desert, he would have to provide a private water company. The neighborhood was originally advertised as having installed sprinklers and having no water meters providing “all you can use water for 1.50 per month”. Of course, this has changed a bit with Winterhaven embracing a bit more of a conservation mindset, although each front yard is still mandated to have at least 50% grass turf.

Richards named many of the streets in the neighborhood, including Christmas Avenue. Richards and Fraesdorf were inspired by a holiday display in Beverly Hills and decided to start the holiday tradition of judging holiday displays in Winterhaven. Early on, prizes included cash, and small appliances such as toasters and a Westinghouse roasting oven. 70 years later the tradition continues with yard signs proudly displayed by winning homes along with a small cash prize. In 1951, the Winterhaven judges rode through the community in a limo on judging night. How festive!

Winterhaven is on the National Historic Register

Winterhaven was listed on the National Register of Historic Places on December 28, 2005. This designation means that homeowners in the neighborhood may be able to take advantage of reduced property taxes.

The Winterhaven Festival of Lights runs for 2 weeks each December. For many years, Tucsonans toured the neighborhood primarily in cars, but now it is open to cars for only 1 day, an improvement that creates a festive community environment. But if walking the neighborhood isn’t appealing, there are motorized hayrides and party bikes available as well.

Many residents of the neighborhood view the annual festival as a gift they can give back to Tucson residents. The annual display attracts about 60,000 visitors each year and is a collection point for the Community Food Bank, which collects thousands of pounds of food each year here.

4 things to love about Winterhaven

Looking to buy or sell your home in Winterhaven? Contact us Hello@RealTucson.com or 520-975-8956

Tucson Mid Century Homes: a guide for buying or selling Tucson grew leaps and bounds in the post war years of the 1950s and 1960s.…
Read More

Do you love the warmth of burnt adobe? Do you prefer the natural character of stained wood? Are you in love with anything vintage or…
Read More

About Aldea Linda Neighborhood Aldea Linda is located north of 22nd Street and east of Swan Road. It was developed 1947 to 1964 and it…
Read More

About Arthur T. Brown Arthur Brown was an influential Architect who moved to Tucson area in 1936 and lived here for several decades. He designed…
Read More

Frank Lloyd Wright’s son’s home is on the market Own an Arizona architectural gem that was almost demolished! Known as the David and Gladys Wright…
Read More