Hidden Valley is a neighborhood just south of Sabino Canyon Recreation area, near Snyder Road and Sabino Canyon Road. It consists mostly of ranch-style homes built between 1960s and 1970s, although there are newer homes in the area too. Homes are typically on large ½ acre to 1-1/2 acre lots. Residents are often seen taking a walk or jogging through the slightly hilly area. Search Hidden Valley homes for sale.

Developer Wesley Miller aptly named the area Hidden Valley because the land was between the Santa Catalina mountains to the north and a large hill to the south, which created the hidden valley.

Close Map
0 Matches Found
1
The data relating to real estate listings on this website comes in part from the Internet Data Exchange (IDX) program of Multiple Listing Service of Southern Arizona. IDX information is provided exclusively for consumers' personal, non-commercial use and may not be used for any purpose other than to identify prospective properties consumers may be interested in purchasing. Listings provided by brokerages other than the listing brokerage here are identified with the MLSSAZ IDX Logo. All Information Is Deemed Reliable But Is Not Guaranteed Accurate. Listing information Copyright 2020 MLS of Southern Arizona. All Rights Reserved.

There is a voluntary HOA which allows access to the Wes Miller private park just east of the neighborhood. The Wes Miller Park has a couple of grills, a pit for horseshoes, and access to Sabino Creek that runs most of the year. The park is private property and is closed to non-residents and residents who don’t contribute to the voluntary HOA.

History of the Hidden Valley Area

The land that Hidden Valley neighborhood occupies was once known as El Sabino Ranch. El Sabino Ranch was started in 1916 by Charles “Charley” DeBaud Sr. DeBaud was a cowboy and rancher who was born in Tucson in 1876. He got his first ranching job at the age of 15. DeBaud owned other Arizona ranches including Hidden Spring Ranch, near Sonoita, and a ranch near St. David.

In 1938 the El Sabino Ranch was purchased by Pell Foster. Foster was a board member of the US Steel Corporation. He spent the winter months at the 700-acre ranch, which consisted of a 10-room main house, a guest house, and 4 employee houses. Foster died on a train while en route from Tucson to New York in 1947.

After Pell Foster’s death in 1947, his estate sold the ranch in 1953 to Mary Gardner. Gardner bought the property “as an investment with the possibility of establishing a registered cattle ranch for purebred Herefords.” As a side note, Gardner purchased Harold Bell Wright’s estate in 1950, which she subdivided a couple years later with the help of Lewis A. Romine.

Mary Gardner sold the land to Wesley and Helen Miller in 1957. The Miller’s, along with their son John Wesley Miller, developed the land in 1958 to 1972. They also developed neighboring Rockcliff Estates subdivision in 1973.

John Wesley Miller is more recently known for developing the Armory Park del Sol, a solar neighborhood that he started in the early 2000s near downtown Tucson. John Wesley Miller died in 2022 at the age of 88.

According to the Arizona Daily Star:

5 things I love about Hidden Valley 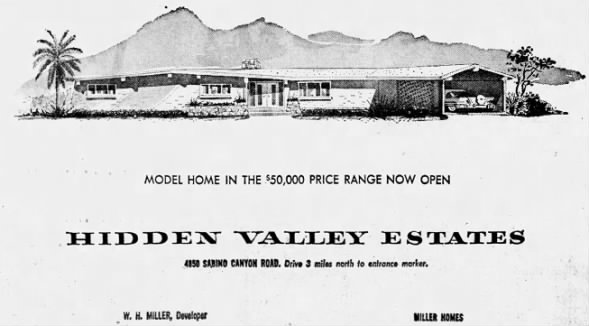 Are you interested in buying or selling a home in Hidden Valley? Contact us today to go over your needs. 520-975-8956 or hello@realtucson.com About the neighborhood Skyline Bel Air Estates is a beautiful community located in the Catalina Foothills area of Tucson.  The area is known for its city …
Read More Juan Worner Baz (sometimes spelled Juan Worner y Bas) is not a name that most Tucsonans would recognize, but his buildings certainly are recognizable. Baz …
Read More Chances are, you’ve heard of BASIS schools. BASIS Tucson and BASIS Oro Valley are tuition-free charter schools (which are funded with taxes, but run by …
Read More